This past week I took the time to get away with my nephew, Brandon. He flew up from Miami, FL and we met in the French Quarter in New Orleans. It was a business trip that we had planned on taking in an attempt to finally wrap up some loose ends that we needed to get in motion before 2017. He handles most of the technology aspects of my art business as well as some business aspects. We had to meet and I thought what better place than New Orleans, Louisiana!

Given that there are so many things to do in New Orleans, I knew we’d have the perfect balance of cranking out work during the day while having plenty of entertainment at night to enjoy. Although it was a business trip with plenty of objectives lined up, we did get a chance to enjoy some good food as well as good company.

We stayed at a hotel called the Bienville House, which is owned by the same family that owns the Hotel Monteleone. Both of the hotels are nice and all that we needed. The Monteleone has a world famous carousel bar that’s a New Orleans must-see! Given that there are so many hotels in New Orleans, I think we made a great decision to stay where we did. It was a quick 4-day trip that left very little room for margin of error. However, we enjoy each others company and have fun no matter what the circumstances might be. Let’s just say there was no time for anyone to hit the tables at Harrah’s (which was probably a good thing).

I’ll give you a rundown of things that we did while on our trip. If you ever visit, you can use it for some pointers. Feel free to reach out to me in interested in having a chat about the city. I love this place and could talk about it for hours on end!

We spent most of our time in the hotel working on various projects that we have lined up for 2017. I felt like we were cramming for a school project at times, typing away, brainstorming, writing, mapping things out and strategizing 12 hours each day. We made sure to take a few breaks to get some nutrients in us from time to time. Brandon woke up about 6am, slugged down a protein shake, and was on his way to the gym just as I had begun to wake up every morning. That was my queue to kick things into gear, you know, mentally and physically prepare for the day in front of me. I’m not the young buck that I once was and it takes some time to get the gears moving at times. I did pretty well keeping up with a 34-year-old!

We started our day enjoying coffee and breakfast together. The brainstorming and jotting of notes literally started before we even sat down for breakfast. I must admit, it was a bit cold out this past weekend. Some of the locals took out their winter gear like they were heading on an Alaskan trip. I knew right then and there that my sports coat may be a little thin for the occasion. I made due and survived.

We made it a point to hit a few restaurants for lunch during our trip. Given the time crunch, we searched for the closest and tastiest places to eat that were going to take hours of our time up, after all, we were there to get things accomplished, not just “chill” so to speak. The first restaurant that we went to was a place called Mr. B’s Bistro on Royal St. It’s a creole restaurant that’s known for their barbecue shrimp. The restaurant is owned by the Brennan family and it was jam packed. The food was pretty good too I must say. It wasn’t the best spot that we dined at but it was pretty good. We quickly finished up our food and headed back to the hotel to work on some more business items that needed attention.

On our way back to the Bienville House, I decided to step into two galleries along the way. Brandon and I saw a few incredible pieces hanging outside of the Angela King Gallery on Royal St. The artist that they were showcasing was none other than Peter Max. They had a number of pieces of his work on display. Both new and older series as well. I’d say that most of the larger pieces were around $20,000 on average. He’s got some funky work that he does and it’s in a contemporary style that I think many younger collectors are looking for. I’ve actually started to apply some of the similar techniques in some of my abstract artwork over the years. Just in experimental form to see what I come up with. As you know, the mind is awfully creative!

I also saw a few pieces that were done by Terri Hallman. She’s a well-known artist that was born in ’62 in Wisconsin. Terri likes to stick to simple subjects as the focal point of her abstract art. Her pieces are certainly unique and every time I see them it makes me want to get in front of an easel and just paint like crazy. In fact, when I step into a gallery and if I see a piece I like one of two things happens. I either immediately want to start painting or I want to buy the piece. After chatting with the individuals working in the gallery and making a few new friendly connections, we started to work our way back to the hotel.

No sooner did I spot the Michalopoulos art gallery. I couldn’t pass by without taking a look at some of his work. For those unfamiliar with James Michalopoulos, he’s a New Orleans artist that is from Pittsburgh, PA. He was born in 1951 and much like myself, he ended up in the deep south. He and I both use our surroundings and make our best attempts to capture watch we see and feel on canvas. James Michalopoulos applies a bold brush style which is the style that I paint in as well.

Lots of his pieces have nice thick gobs of paint on them and many of them were jumping off the walls. Lots of the pieces were giclee’s on display but a few originals were spotted in the mix. The look in Brandon’s eyes, I knew he was ready to hit the computer again and steamroll through some of our objectives. We said our goodbyes and were on our way.

When we got back to our hotel, we had a wild idea. It wasn’t within our objectives for the week but we decided to go for it anyway. We redesigned the entire website in less than two hours! Shooting for a more modern approach, we decided to go with custom black and white photos that I took at my studio and build a new layout around those images. We were left with a completely new look that had me floored as to what we could accomplish in just a short period of time. The online store functions similar to before and it’s  fully functioning now, just in time for Christmas shopping. Here’s what the new homepage looks like…

I added a section which displays a few fun facts about myself and my artwork. In addition to that, if you scroll down the homepage, you’ll find all the series and an artist statement that I paint behind every single time my brush hits a canvas or panel.

We spent most of our evenings eating dinner at my good friend Franks. He owns a restaurant on Decatur St. called Frank’s Restaurant. We had chicken Marsala, steamed mussels, Frank’s famous muffuletta sandwich and more. It’s always a good time. The staff, the company we shared and the food was delicious. Now that I think of it, I need to make more trips over this way just for the food! Here’s a picture of us one night enjoying ourselves during dinner at Frank’s Restaurant.

We also made a trip to Cafe Du Monde. It’s a sin if you don’t stop here for some coffee and beignets while in New Orleans. Brandon was excited to be there although he didn’t touch the food because he was trying to eat somewhat healthy. I think I saw him sneak one, don’t tell anyone, though! Here’s a video of our time spent at the infamous Cafe Du Monde chicory coffee spot in the French Quarter.

Took a break at @cafedumonde with my nephew Brandon. I love their coffee! Thankful for a break in NOLA.#cafedumond #Nola#coffee#gregcartmell #art#artist

Last but not least, we had a nice meal at NOLA. Emeril wasn’t there but the food was still delicious. I think we both left there in a food coma from eating so much but it was well worth it. We had Cajun bbq shrimp and some good old fashion country fried chicken. Here’s a picture of the fried chicken sandwich that I ordered at NOLA. 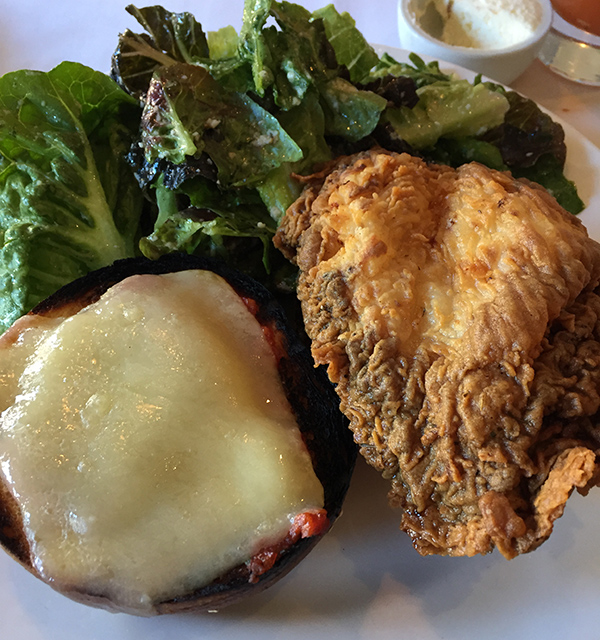 All this New Orleans food talk reminds me of the original artwork that I created down here. I’ve painted some oil paintings featuring Louisiana shrimp boats, swamps, landscapes, cityscapes, and more. Each piece uniquely hand-crafted so that no two pieces are alike. That’s the only way I paint and I don’t plan on changing that ever in my life.

Don't worry, your personal info is safe with me. We never share it with anyone.