Releasing a collection of original artwork takes a significant amount of time and effort. I typically build up collections slowly and add new paintings or collections as I complete each original piece of art. However, with this collection, I spent a significant amount of time creating the collection all while keeping it concealed from the public to be able to release the entire collection at once.  I was a huge undertaking and now that the Livingston Collection has finally been completed, I’m ready to share it with the rest of the world. For those that haven’t been to Livingston, MS, I encourage you to visit the new town and for those of you that reside or have visited the area, hopefully, you will appreciate what I’ve attempted to capture and preserve for many years to come. I’ll waste no further time of yours and get right into the collection.

I was first introduced to Livingston, MS when I was invited to do an oil painting demonstration at a fundraiser for the governor. This was one of the many fundraisers that I participate in. I took a long drive through the country outside of Flora, Mississippi. I drove through miles of beautiful rolling hills of horse country and was enjoying the beautiful privately owned farms that decorated the land, when all of a sudden, I entered Livingston, Mississippi.

Livingston was once a prominent commercial location that was lost in the Civil War.  It has recently come back to life. The old town of Livingston (which has been around since 1883) has been reconstructed and can best be described as Mayberry on steroids. Complete with candy shop barbershop two beautiful restaurants, as well as the start of a community of cottages, and all with beautiful surroundings from every angle. In 2012, something known as the Farmers Market had opened in the town. It soon became a popular location for individuals to enjoy great food, fun, and lots of entertainment. Musicians such as the Grammy Award-winning Travis Tritt have performed in Livingston.

In 2013, real estate developers invested $73 million in an attempt to make the Town of Livingston a great location once again. After meeting with some of the developers, spending time with them, and knowing what can happen as towns progress, I wanted to do my best to preserve the nature and beauty of Livingston so that visitors, residents and anyone else could enjoy pieces of history that I’ve captured.

The whole collection took approximately a year to create. Each piece reflects the surroundings and the beautiful land around Livingston, MS.
I was fortunate enough to meet David Landrum one of the founders of the new Town of Livingston. I was also fortunate to meet Michael Bollenbacher,  who was kind enough to take me on a tour of the town and its surroundings. This is where a lot of the images of the Livingston collection came from.

Whether you’re a die-hard Livingston, Mississippi or just a lover of detailed landscape art, then I encourage you to take a closer look at the collection and each individual piece. One of the first places we came on was the back lake, with very clear water fed by a natural spring.  A small community of egret birds that seem to have made themselves at home on part of the lake where present. This first painting reflects just that and it’s titled “Back Lake.”

The second painting is of someone’s little boat or skiff pulled up on the shore at sunset of the back lake. The sun was going down and put an orange  glow over the land and the water. It was such a peaceful feeling, that is what I tried to convey in my painting. It’s titled, “Sunset Skiff.”

When I met with David Landrum, he told me that the town had originally been founded because of a very clear beautiful spring that existed on the land. Michael Bollenbacher was kind enough to take me to visit this spring and it was all that I had imagined and more. There was beautiful fresh clear water trickling out of the side of the stone hill which was creating a pool with sugar white sand in the bottom. The spring had been a meeting place for the people of the town in the early days. To this day, the water is gently collected by the locals. It had a magical quality about it and that is exactly what I tried to capture in the painting. It’s been titled, “The Spring” for every reason you can imagine.

The fourth painting is a scene of the Taylor Family’s land. There was a very rich garden planted in perfect rows which helped draw my eye into a beautiful patch of light. This is one of those paintings where the quality of the light becomes the actual subject itself. I love being able to capture nature moments like these. It was absolutely perfect, to say the least. “The Garden” was really a treat to capture.

There is so much beautiful farmland and rolling hills on the way to Livingston. Right on the outskirts of the town, I was able to capture a sunset in this original oil painting below. I barely had enough to do a small sketch. I then created a much larger piece back at the studio to showcase the natural beauty at a much great scale. This original piece is titled, “The Sunset” in Livingston.

This is an example of the large expenses of beautiful land surrounding the Livingston area. Winslow Homer the great American painter one said he love to paint in the “Golden Hour” this is usually the late afternoon anywhere from 4:30pm to 7:30pm when the sun is low and giving off a beautiful golden glow. This was a piece of land in the Livingston Area with some beautiful clouds reflecting the golden hour. I pulled off to the side of the road and did this like many of the others on location painting plein air.

Between the town of Livingston and the lake, there is an area that, late afternoon and early evening, can be found with locals enjoying wonderful food by the county seat restaurant. It’s a chance for the locals to gather in fellowship. At night, several Adirondack chairs surround the fire pit ,under lights strung up in the trees. The name of this painting is appropriately called the “Gathering Place.”

This is a painting of the Taylor land on a beautiful bright summer day. The quality of the light was so clear and pleasurable to paint under. I tried to capture that feeling in this piece. It’s been titled appropriately as “Taylor’s Land.”

This is an example of some of the beautiful creeks that we have in the area of Livingston and Flora Mississippi it was an early morning for work and gave off a very soft light the fill up on this scene. I painted a small example to try and capture that feeling. No sooner did I return to the studio for the completion of the painting. It is titled “Soft Light.”

When driving along and approaching the town of Livingston you drive-by this scene. It is a beautiful pecan grove. I love the way the light dappled through the trees and thought it would make a great subject for one of the series. This is one of David Landrum’s favorite places. It is called “The Pecan Grove.”

This final painting is a landscape of Church St Road. This can be found is found right smack dab in the middle of the town of Livingston. It’s an older road that leads off to a church and has remained in red clay, which seems to land to its nostalgic look. I took artistic license to remove the street sign, and it is titled “Old Church Street.”

Each of these pieces in the collection can be purchased. If you’re interested in purchasing any of the pieces, you can click on the image or the titles throughout the article. Should you be interested in purchasing the entire Livingston Collection, please feel free to contact me by subscribing or e-mail me directly at greg@gregcartmell.com. The collection is complete and I will not be adding any new original pieces to this collection. 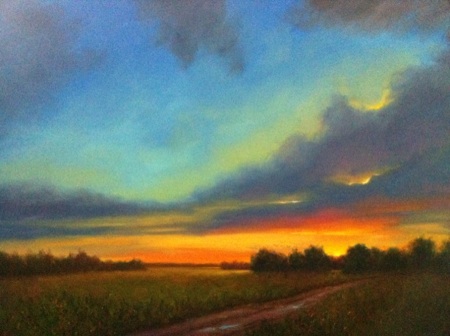 This is a large studio piece I did from a smaller painting done on location one summer night this past summer. There was this typical red clay road leading through the field towards the sunset. Earlier that day was the tail end of a summer storm so the cloud formation was just absolutely beautiful. At just the right moment I tried to capture the suns light reflecting under the storm clouds. I love this effect. This piece was 48×60 inches. The on location piece was a 16×20 size piece.

This is one of the many places I return to paint plein air. I start to paint and hold off until the right moment to capture the sunset at its best moment. I tried to compose this painting with the sun right on the “golden section”. I always try to avoid placing where I want the viewer to look in the middle of the canvas or sectioning up the canvas in “halves”. I do this by trying to think mostly in terms of thirds or odd numbers. Its seems much more interesting when doing so! I hope you enjoy the piece as much as I did creating it!