I learned how to paint at a very young age. And as anyone knows that has also learned to paint, one of the main reasons they can’t is due to fear. Of course, it takes tens of thousands of hours to perfect the art of painting (pun intended).

The funny thing is, collecting and creating aren’t so different.

Many people don’t attempt to paint, collect or invest in art because they’re terrified of making a mistake…

The thing is – you need to make decisions in life to grow.

Any good artist has created pieces they’ve not been completely satisfied with. Those pieces may never even be shown to the public. Additionally, collectors have made the mistake of not purchasing a piece that’s come to fruition from an enjoyment and value perspective.

Heck, the best artists constantly push the limits and stretch the creative frame of mind, so they can see just how unique they can be. Avid collectors put forth a great deal of effort to build a collection they’re proud of. Both push it to the limit.

So here’s my point:

Embrace everything that life throws at you. That includes the mistakes and passed up opportunities.

Try new painting techniques, acquire more art, enjoy the entire process. You will look back and appreciate it all that much more.

Whatever you do, don’t let fear hold you back from making a decision.

Even when you’re deep in the trenches or facing the storm in front of you, there’s always a chance that the sun will be shining or peacefully setting once it’s over.

That said, here are two new pieces for today. The first one is called “Storm Front” and it’s an 8″ x 8″ oil on panel that is available for $225 and the second piece is the deal of the day for $100, which is titled, “Clay Road Sunset.” It’s a 5″ x 7″ oil on panel sunset piece. Both are originals and they are each signed. Please find the links below. They are available for purchase (for a limited time only). 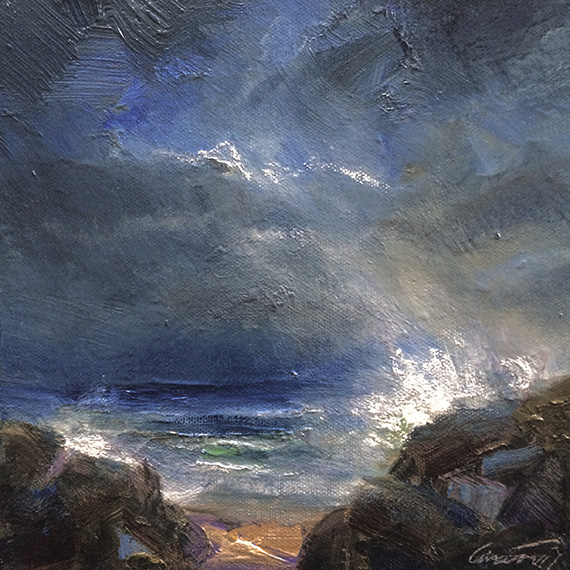 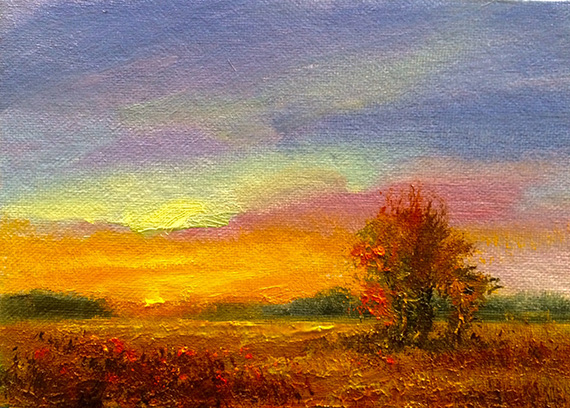 Enjoy the rest of your day!

I typically prefer to not get mixed up in politics too much. In fact, keeping it private is always best practice, especially for local business owners. That’s just my personal opinion anyway. However this time, I want to talk about President Trump and something that goes on in the White House.

Did you know that First Families are able to make changes to the White House? They sure can and one of those changes is with regards to the art collection displayed in the White House.

According to my sources, President Trump wasted no time in making a few decor adjustments within the Oval Office. Apparently, the President moved around some statues and even installed gold drapes.

Curious how pieces of work end up in the private sections White House? Well, it’s quite simple, what typically happens is the President sends out staff from the National Gallery of art. He makes requests related to specific artists and individual pieces at times. Both the President and the First Lady have the power to appoint a decorator or even a personal friend to choose various works of art to be displayed.

It’s a bit different I guess with regards to the work being displayed in the public areas of the White House. As we all know, art costs money and many working artists such as myself spend years creating art to make a living. They need to be compensated for their work to survive.

That’s where the White House Historical Association comes into play. This is an organization which is not for profit that works to raise money to fund art purchases. It’s been said that they raise these funds by collecting donations from private donors in addition to selling merchandise.

Art has played an important role in the White House for many years. As far back as the 1960’s, there has been a process in place for all of this. Based on my research, a curator is appointed to make sure that no gaps exist in terms of the art. For example, if they’re lacking a certain period of time, then their job is to hunt down pieces from that time. Same goes with locations.

In recent years, Former President Bush and Former President Obama have added modern pieces to the White House collection. When asked how I feel about this by a local collector, my response was very positive. I believe as time passes by and various types of art trends one way or another, then the curation process should respect that. However, there’s something about a traditional and bold brush landscape oil paintings as well as portraits that just seems to fit so well in the White House. That’s not to say that I’m opposed to having one of my abstract paintings hanging in the White House. In fact, it would be nothing other than a complete honor if so. Especially given that the White House has museum accreditation.

Over time, I’ve had the pleasure of painting many celebrities, one of which was Barbara Bush. In addition to that, I’ve also had the pleasure of painting political figures such as Governor Haley Barbour. It was an honor to do so and I’d be willing to do more if asked. I’d, of course, be just as honored to paint a modern or contemporary piece just the same. Enough about me, though, I thought you might find that interesting about the White House given that there’s so much going on from a political perspective today. This subject takes away from all the banter, at least it gives us something to think about that’s not just political.

I’ve decided to do something different this June. Something I’ve never done before and it’s going to take place for the entire month. Starting 6/1/2014 and over the next 30 days I will be releasing a new studio demo piece via email everyday for 30 days to the subscribers. Each piece will be for sale and they will go fast! Here’s how it works:

If your are not on our email list and you want to get the studio demo offers, you should subscribe here now!